The Serial ATA (SATA) interface was designed primarily for interfacing with hard disk drives (HDDs), doubling its native speed with each major revision: maximum SATA transfer speeds went from 1.5 Gbit/s in SATA 1.0(standardized in 2003), through 3 Gbit/s in SATA 2.0 (standardized in 2004), to 6 Gbit/s as provided by SATA 3.0 (standardized in 2009). SATA has also been selected as the interface for gradually more adopted solid-state drives (SSDs), but the need for a faster interface became apparent as the speed of SSDs and hybrid drives increased over time. As an example, some SSDs available in early 2009 were already well over the capabilities of SATA 1.0 and close to the SATA 2.0 maximum transfer speed, while in the second half of 2013 high-end consumer SSDs had already reached the SATA 3.0 speed limit, requiring an even faster interface.

While evaluating different approaches to the required speed increase, designers of the SATA interface concluded that extending the SATA interface so it doubles its native speed to 12 Gbit/s would require more than two years, making that approach unsuitable for catching up with advancements in SSD technology. At the same time, increasing the native SATA speed to 12 Gbit/s would require too many changes to the SATA standard, ending up in a more costly and less power efficient solution compared with the already available and widely adopted PCI Express bus. Thus, PCI Express was selected by the designers of SATA interface, as part of the SATA 3.2 revision that was standardized in 2013; extending the SATA specification to also provide a PCI Express interface within the same backward-compatible connector allowed much faster speeds by reusing already existing technology.

Support for SATA Express was initially announced for the Intel 9 Series chipsets, Z97 and H97 Platform Controller Hubs (PCHs), with both of them supporting Intel Haswell and Haswell Refresh processors; availability of these two chipsets was planned for 2014. In December 2013, Asus unveiled a prototype “Z87-Deluxe/SATA Express” motherboard based on the Intel Z87 chipset, supporting Haswell processors and using additional ASMedia controller to provide SATA Express connectivity; this motherboard was also showcased at CES 2014 although no launch date was announced.

In April 2014, Asus also demonstrated support for the so-called separate reference clock with independent spread spectrum clocking (SRIS) with some of its pre-production SATA Express hardware. SRIS eliminates the need for complex and costly shielding on SATA Express cables required for transmitting PCI Express synchronization signals, by providing a separate clock generator on the storage device with additional support from the motherboard firmware.

In May 2014, Intel Z97 and H97 chipsets became available, bringing support for both SATA Express and M.2, which is a specification for flash-based storage devices in form of internally mounted computer expansion cards. Z97 and H97 chipsets use two PCI Express 2.0 lanes for each of their SATA Express ports, providing 1 GB/s of bandwidth to PCI Express storage devices. The release of these two new chipsets, intended primarily for high-end desktops, was soon followed by the availability of Z97- and H97-based motherboards.

In late August 2014, Intel X99 chipset became available, bringing support for both SATA Express and M.2 to the Intel’s enthusiast platform. Each of the X99’s SATA Express ports requires two PCI Express 2.0 lanes provided by the chipset, while the M.2 slots can use either two 2.0 lanes from the chipset itself, or up to four 3.0 lanes taken directly from the LGA 2011-v3 CPU. As a result, the X99 provides bandwidths of up to 3.94 GB/s for connected PCI Express storage devices. Following the release of X99 chipset, numerous X99-based motherboards became available.

In early March 2017, AMD Ryzen became available, bringing native support for SATA Express to the AMD Socket AM4 platform, through use of its accompanying X370, X300, B350, A320 and A300 chipsets. Ryzen also supports M.2 and other forms of PCI Express storage devices, using up to the total of eight PCI Express 3.0 lanes provided by the chipset and the AM4 CPU. As a result, Ryzen provides bandwidths of up to 7.88 GB/s for connected PCI Express storage devices. 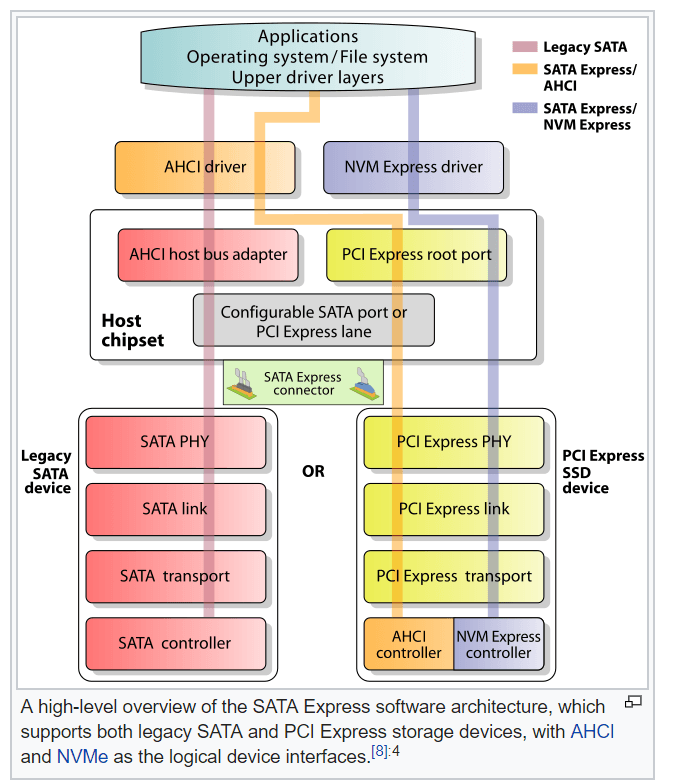